From tree-lined moguls to large bowls, North American ski resorts offer some of the world’s most varied skiing terrains. This article will profile some of North America’s top ski resorts, ranging from Alaska to California and other incredibly beautiful states with amazing mountains. 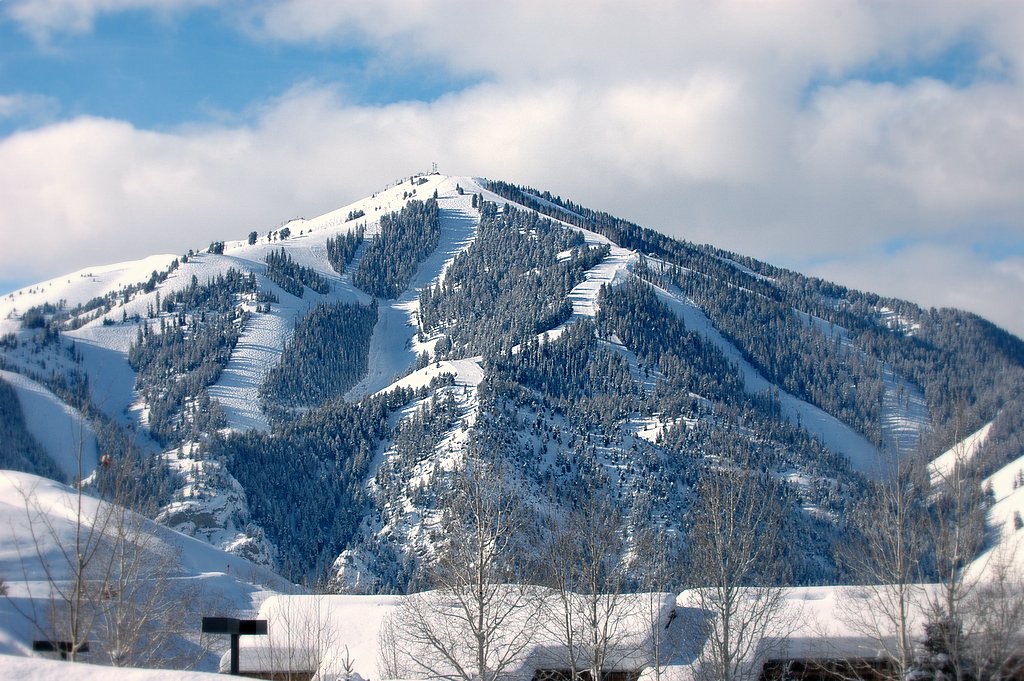 With many claims to fame (including being the home of the world’s first chairlift), Sun Valley is a destination that every avid skier has to visit at some point. With the challenging Bald Mountain and the tamer Dollar Mountain, it has something for everyone. The Sun Valley resort itself is very high class, complete with luxury resort hotels, ice rinks with regular shows, and other attractions.

Aside from the skiing, Sun Valley is well known for being a home of the rich and famous. Ever since it was brought to the public eye by Ernest Hemingway, it has increasingly seen celebrities such as Bruce Willis and Arnold Schwarzenegger purchase homes and spend time there. During the summer the area is also incredible, with great outdoor recreation, world class golf courses, and the famous annual Allen and Co conference.

Telluride is a cozy town nestled into the mountains of Colorado. It has varying ski challenges for all ages, from steep and nearly vertical runs for the experienced skiers to more gentle slopes for those who desire a more stable run. Telluride features an adorable downtown featuring many bars and restaurants that serve up hot beverages during all hours of the day.

Vail Mountain is the largest ski mountain in America and second biggest (to Whistler Blackcomb) in all of North America. On an average day, there are only approximately two skiers per acre of terrain among the Vail trails. There’s an abundance of ski runs such that you never have to ski the same terrain twice. The mountain is separated into three distinct sections, each one a different style of terrain. This enables Vail to offer a unique skiing experience according to your abilities. In addition to the snow-covered mountain, Vail also offers a great nightlife experience in the town.

It’s definitely not a widely known ski resort in Utah as far as being one of its top destinations, but Alta is starting to gain a reputation as a hidden jewel among knowledgeable skiers. It is regarded as a place where skiers can venture off the beaten path as long as they aren’t bothered by having to navigate among the trees. If you don’t like ski paths with trees, you can instead hop onto one of Alta’s more open ski paths.

This resort is nestled into the breathtaking Cottonwood Canyon area of Utah. The fact that Alta and Snowbird are connected make it feel like a large European resort. Pro skiers go here for the number of good powder days it offers. The Alta ski resort in Utah averages approximately 500 inches of snow a year. The snow is not very dense (the locals call it Utah blower pound), which makes it quite easy to ski.

There’s also a range of dining facilities scattered throughout both resorts. You can take a quick detour to one of the ski lodges, have breakfast in the morning with coffee, and then head back out to ski the slopes.

There’s a shared ridgeline separating Alta and Snowbird. The favorite way for locals to ski to Snowbird from Alta is through they Keyhole path. There’s also another connection that starts at Sunnyside going on up through the Sugar Loaf mountain. The added benefit is that there’s free skiing on the Sunnyside in the late afternoons among its various intermediate ski paths.

Utah ski resorts gained a large upswell in popularity after the 2002 Salt Lake City Olympics. The Utah license plate proudly displays a skier plowing through the greatest snow on earth. The snow is abundant throughout the state. Park City is the center for the region’s three main ski resorts (The Canyons and Deer Valley are the other two besides Park City Mountain Resort). The world-renowned Deer Valley ski resort is often considered the best resort in all of the United States. The Sundance Film Festival also helps bring out the Hollywood stars, which is definitely another tourist attraction.

This West Coast mountain ski resort is an ideal destination for those who want to have options among varied ski paths. Mammoth Mountain features acres of ski runs with varying difficulties. The scenic setting also makes a nice respite from the urban jungle of Los Angeles. Although it’s not as frequented as Lake Tahoe, it’s also a less crowded travel destination.

This is a nice chance to experience Alaskan snow while not paying a huge price. Although flights to the far northwest state of Alaska must be factored into your itinerary, Alyeska is worth the plane ticket if you’re looking for mountains that aren’t very crowded. If you’re a more experienced skier, take a chopper and jump off into the mountain’s backcountry for an opportunity to tread some pristine powder.

Jackson Hole Mountain Resort in Wyoming features some of North America’s most challenging ski terrain. Known for steep backcountry terrain and deep light powder, Jackson Hole is appropriate for all skill levels. Jackson Hole is especially conducive to skilled skiers as they are very tolerant to out of bounds skiing. There are also groomed runs and open bowls for beginner skiers to practice upon.

This resort tends to see fewer crowds compared to the resorts in neighboring states. With that said, Jackson Hole is a bit more challenging compared to most other ski resorts.